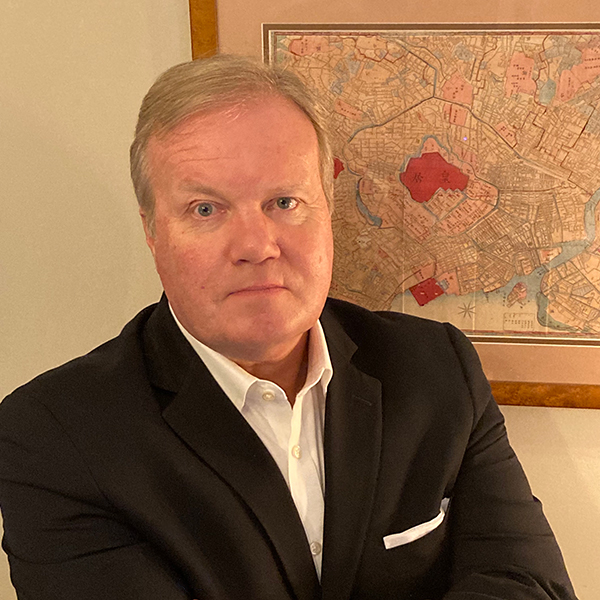 But don’t be fooled by his current gig in 2D tech, Mike knows all kinds of spatial computing. He has more than 20 years’ experience working with the technology, so he has seen more companies and eras come and go than nearly any other executive in the business. He has also shown rare foresight—he began working with 3D technology for training as early as the late ’90s, a time when many businesses found the idea to be laughable, or pure science fiction.

We were lucky enough to catch him last month for a few questions. He told us why spatial computing is nothing new, what has changed with the technology over the past few decades, which companies can ignore the hype completely, and why the next generation will bring spatial computing to the next level in the business world.

Sean Higgins: Let’s start with a softball. What does spatial computing mean to you?

Mike Cottle: The formal definition of this term runs something along the lines of “spatial computing is the processing of information related to the interaction of objects and people in a virtual environment.”

What does it mean to you in the other sense—that is, what’s its significance? A lot of people treat it like a totally new technology that represents a new era for computing and even human culture. As someone who has 20+ years’ experience with the tech, what do you think about that?

What it means to me is it’s creating this virtual representation of a real or imagined place. And that can be as minute as organs within a body, to help doctors understand how to operate, or at the scale of a full city landscape that you can traverse so that you can gain insights on traffic flow.

There’s a misperception that this is new technology. Much of it has been around for a while. But now we have a new label on it in order to gain greater valuations for startups. And, I would argue, the derivative benefits of the technology have not been realized yet.

In the past, it was restricted by the size of the computational device you needed. That didn’t make it very accessible.

I was involved in the early days of 3D computer simulation for training purposes, ie, creating 3D virtual worlds for airplane, driving, and other simulators, as well as immersive worlds using VR technology for applications like virtual maintenance. Some of these use cases are becoming more practical and viable given the miniaturization of computing technology. What was only possible with a huge Silicon Graphics workstation back in 1997 is now possible with an Oculus headset.

Today, it’s much more realistic to bring the technology into everyone’s hands. So maybe we’re reaching an inflection point, where these applications become more viable.

This is a good time to ask—Where is spatial computing on the hype cycle? Why?

I think, based on the definition that I have provided, spatial computing is on the Plateau of Productivity. Spatial computing is solving real problems for organizations whether it’s training simulation (been around for a quarter century) or helping autonomous vehicles navigate their environment. Today, the basic concepts of spatial computing are being applied to real world problems.

To move forward, I think the spatial computing industry will have to embrace vertical applications. Whether it’s city planning, medical training, or training mechanics to fix an air conditioner. So I think it’ll be interesting to see how companies embrace this technology to augment some of the things they’re doing with physical 3D worlds.

Can you talk about your own company, NextBillion.ai? What do you do?

Nextbillion.ai provides a mapping and routing platform similar to Google or Mapbox that provides the essential functions needed for many applications such as map display, routing, distance matrix, etc. But we are unique in that we allow these functions to be accessed as a cloud offering and as an on premise solution. We are also unique in that we allow our customers to create and manage custom data sets which may reflect some of the unique requirements of their business such as unmapped areas, turn restrictions, delivery restrictions and proprietary Points of Interest. And lastly, we are unique (and this is where the AI comes in) because we are able to apply machine learning to a customer’s data to create custom routing profiles that reflect the driving patterns of their particular vehicles.

We anticipate using additional machine learning techniques in spatial computing to infer other information about mobility and delivery operations. For instance, if we are detecting that a delivery van is always parking at a certain location to deliver to a set of addresses or locations, we can begin to create a singular destination for that range of deliveries. The delivery address becomes the preferred parking location, not the front door to that set of apartment blocks. Likewise, if we detect that a courier is repeatedly delivering a package to a certain location of a building (instead of its front door) we can move or change the delivery point to that location. This will improve efficiency for the operating company.

Are there any 3D spatial computing applications in the future?

There are certain aspects of the ride sharing experience that can be improved through 3D spatial computing. One of the things that we toyed with, for instance, was this idea of creating an augmented reality “pin” for where the person or the driver is. So as a driver is approaching a crowded street, how do they know who to pick up? If you pop a virtual pin in an augmented reality view to show where the rider is, it makes it easier for the driver to find them.

Or think about a long line of cars in an airport. It’s the same problem for the rider, how do they know which ride is theirs? If they can see an augmented view that shows the car highlighted in 3D, then that makes it easier for them. So there are some aspects to spatial computing that could help with the mobility use case. But I don’t think that there’s as much application of spatial computing as there is in other verticals.

If I were to press you for your opinion on whether spatial computing is going to change everything, or if it’s only going to have practical applications in certain verticals, you would probably say the latter.

On the consumer side, spatial computing could really change things. There could be many consumer applications that could change the way that we interact with people, the way we converse with people, and more.

As far as enterprises are concerned, I might be jaded, but my practical theory is that most technologies don’t take off until there’s some ROI or benefit to achieve. So I’m much more focused on the issue of, What’s the benefit for the technology in an enterprise setting? How much better am I going to be at training someone or making decisions when I use this technology?

Even though spatial computing technology is great and innovative, some companies just won’t get much return from it?

Right. I don’t think that all companies have a use or a need for spatial computing.

Are there questions that a company could ask to determine whether spatial computing technology is useful for them? Or whether they can just ignore the hype completely?

They need to recognize whether they are operating in a distributed world, for one thing. Are they in an environment where their employees have to interact with either a device or the physical world?

Think about a bank. It’s pretty simple for a teller to take money out of the cash register and count it out. So that business is much more of a digital non-virtual world, or non-3D world.

Contrast that with a construction company, who might want to train someone on a new piece of equipment. They’re operating that piece of equipment, and doing it in a real 3D world where they’ve got to consider the impact of the environment around them, as well as the gravel or dirt they might be moving, or anything else you might need to simulate in order to train them. Performing that training in the real world is expensive and environmentally damaging. So why not perform some of the preliminary training to build “muscle memory for those tasks in a simulator?

Or think about manufacturers who might be trying to evaluate the process of assembling or servicing an object or machine. They should develop some form of test case to understand the applicability of spatial computing to their business.

But some companies have to recognize that maybe spatial computing just doesn’t apply to them. And they don’t have to worry about it.

Let’s assume a company has determined that its vertical is a good candidate for using spatial computing, but they don’t know where to start. What’s your best advice for how they can find their own applications for the technology?

Look at some areas of pain in your business and see where you could possibly apply it. So, if you’re a steel mill, for instance, and you’re having a high rate of accidents, you could look at improving training by using this kind of technology.

Seek out pain points, or where you might need innovative solutions that the standard method isn’t helping to solve.

When we were talking earlier, you said you think there’s a generational divide that is preventing companies from adopting spatial computing technology, even when it could mean huge ROI. Can you expand on that?

This divide was never so obvious as when I was with a company called Multigenic, where we had this split personality. We were working with game developers, for real time 3D game development technology, and our other customer base then we was were also working with the military, primarily for creating worlds for tank simulators, flight simulators, etc.

And I would literally have to change clothes when I would visit clients. On the one hand, if I walked in to meet a game developer with a suit on, I’d have no credibility. And then if I had walked into a meeting an admiral wearing with the military with a t-shirt and on in a ring in my ear, they’d have thrown me out.

Those two cultures were so very different, and they were reflected in the company’s split personality as well. On one hand, you had game developers who thought, “I can make these really cool games and put whales in gymnasiums.” Then, on the other hand, on the military simulation side, people are saying, I want to build a perfect F18 flight simulator. And so those are two very different kinds of people—but it’s the same fundamental technology.

If I understand you, what you’re saying is that the next stage of spatial computing is going to require bridging that gap. Between the fantastical applications of game technology and real-world problems.

Right, it’s about making that leap. While you might think that that’s very intuitive, because it’s exactly the same technology, it’s very difficult for people to go from one mindset to the other.

And I think it’s going to take people in your generation, who can look at a problem and say, I know how to solve that problem in a video game, so I can do it here. They’ll be able to jump from their consumer experience in a 3D virtual world, and apply that experience to a real life problem.